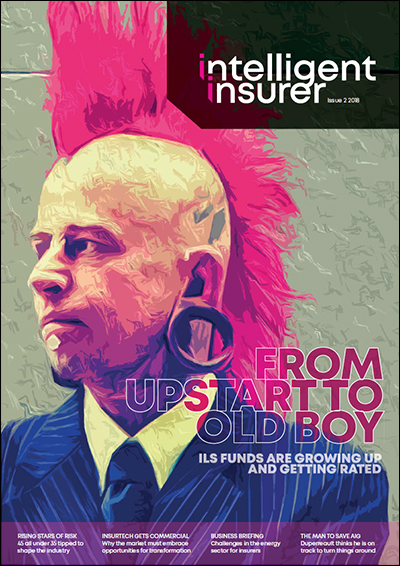 The second Intelligent Insurer issue of 2018 is now available to read online.

Click here or on the front cover to read the magazine.

From upstart to old boy
Some of the bigger ILS funds are well down the road towards securing ratings, and that could be a game-changer for the market. Intelligent Insurer reports.

Can Duperreault turn AIG around?
AIG’s Brian Duperreault has promised that he is the man to turn things around and get the company back to delivering double-digit returns.

Insurtech: making the leap into commercial
Insurtech has had its most tangible impact on the personal lines side of the industry, but that could be about to change, Trevor Maynard of Lloyd’s tells Intelligent Insurer.

MGAA looks to embrace insurtechs
The lines between insurtech companies and MGAs are blurring, and this has led to the latter’s association looking to bring technology companies into the fold.

Rising Stars
As part of a wider feature available online, Intelligent Insurer speaks to 45 young executives—all under 35—destined for success within this evolving sector.