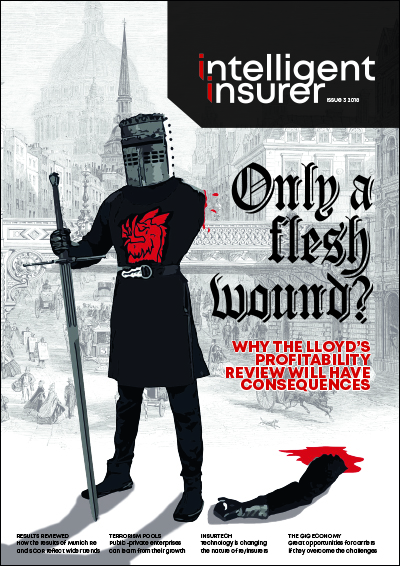 Intelligent Insurer Issue 3, 2018 is now available to read online. Click here or on the front cover image above to access the magazine.

If you would prefer to jump to a highlighted feature, click on a headline below.

Bloodshed at Lloyd’s
Lloyd’s profitability review is being described as the biggest shakeup of the market since the 1990s—and it could have far-reaching consequences. Intelligent Insurer reports.

Pricing pressure: bigger is better
SCOR’s Denis Kessler was among the first to propose the idea of ‘tiering’ and that size would become increasingly important. Intelligent Insurer investigates how his prediction is playing out.

Changing the DNA of insurers
The very definition of what constitutes an insurance company could be starting to change. Intelligent Insurer investigates ahead of October’s Intelligent InsurTECH Europe event.

Adapting to a changing world
Public-private enterprises must adapt, and terrorism poolsare illustrating just how efficiently this can be done, says Emma Karhan of Aon Benfield.