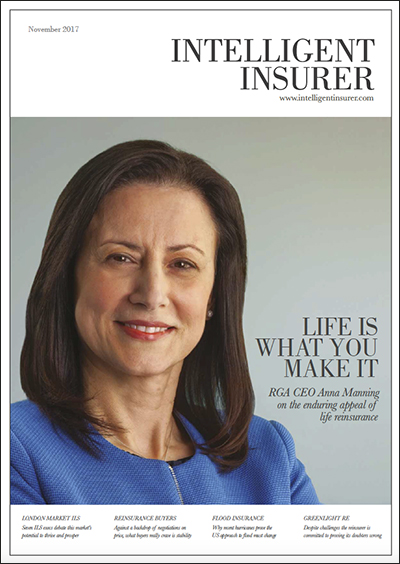 The November 2017 issue of Intelligent Insurer is available to read as a digital magazine on your computer, smartphone or tablet.

RGA: Looking at the brighter side of reinsurance

As more reinsurers seek to grow their life & health portfolios, Intelligent Insurer spoke to Anna Manning, CEO of RGA, the one reinsurer whose primary focus is this area, to establish whether things there are really as rosy as its rivals hope.

Greenlight Re: Proving the pundits wrong

The hedge fund reinsurance model has had plenty of critics but Greenlight Re is still going, still growing and proving them wrong, as Brendan Barry, chief underwriting officer, of Greenlight Re, tells Intelligent Insurer.

A failure of models could turn the market

Some re/insurance executives yearn for the heady days of a hard market but most are more realistic, given the abundance of capital in the industry. The recent hurricanes have given the market an insight into just how rates might respond to big losses, as Intelligent Insurer reports.

The covered agreement signed between the US and the EU has the potential to free up billions trapped in onerous collateral requirements. But UK re/insurers must remember the deal will not cover them post-Brexit. Intelligent Insurer reports.