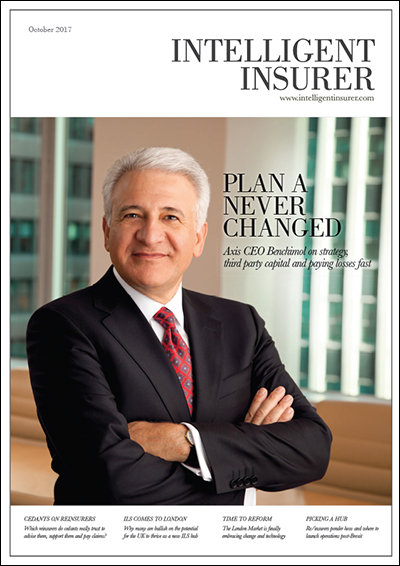 Click here or on the front cover image above to read the October 2017 issue of Intelligent Insurer.

You can also jump directly to any of the below features from the magazine.

Plan A never changed: Axis CEO Benchimol
Eighteen months since it walked away from a bidding war for PartnerRe, Axis Capital has completed a new deal with Novae. Albert Benchimol, chief executive of Axis Capital, explains to Intelligent Insurer why the company has never diverted from plan A, his view on third party capital and why he will sometimes send a client a cheque before a claim has been made.

Perserverance is the message of Swiss Re CEO
The whole P&C value chain is not earning its cost of capital, says Swiss Re CEO Christian Mumenthaler, who explains to Intelligent Insurer how, despite this, Swiss Re is well positioned to navigate the challenging environment.

London’s calling
From a London base and in spite of Brexit, Mapfre Global Risks is set on a path of steady international expansion. Ignacio Baeza, vice chairman of Mapfre and chief executive of Mapfre Global Risks, explains to Intelligent Insurer the company’s goals and why London still makes sense.

Not all reinsurers are created equal
Flaspöhler, part of NMG Consulting, conducts an annual global study designed to illustrate reinsurers’ competitive positioning and value proposition in relation to their peers. Here, we reveal how the top reinsurers fared when brokers and insurance executives across Europe, the Middle East and Africa were surveyed.