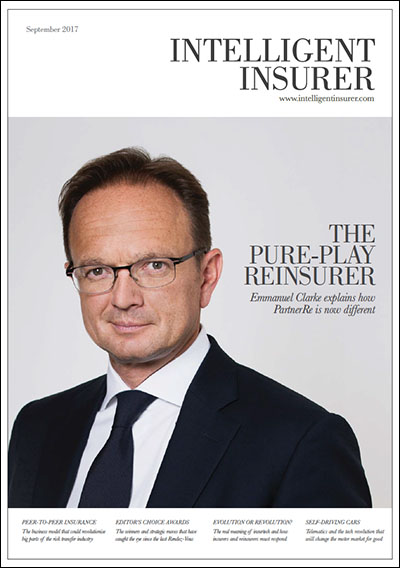 The September 2017 issue of Intelligent Insurer is available to read as a digital magazine on your computer, smartphone or tablet.

PartnerRe: Building on stability
Emmanuel Clarke, chief executive officer of PartnerRe, explains to Intelligent Insurer how he is building on the stability achieved through private ownership by Exor to create secure, long-term partnerships with cedants.

Lemonade: the tech company ‘doing’ insurance
As the chief executive of what is arguably the most disruptive startup the insurance industry has ever seen, when Lemonade’s Daniel Schreiber talks, people listen.

Barbican: Bucking the trend for 10 years
Barbican has bucked many trends and proved the doubters wrong since its ‘brutal’ 2007 launch. But going against the grain is second nature to David Reeves, its chief executive, who is comfortable doing things his way, away from the pack.

Editor’s Choice Awards
Intelligent Insurer has decided to introduce a new set of annual awards designed to recognise, celebrate and explain some of the most important deals, innovations and other changes the industry has experienced in the past 12 months.

Simplifying to succeed: Aspen Insurance
Some 18 months ago, Stephen Postlewhite, chief executive officer of Aspen Re, was moved to head up the group’s insurance business and tasked with repositioning the business and implementing a new business model.