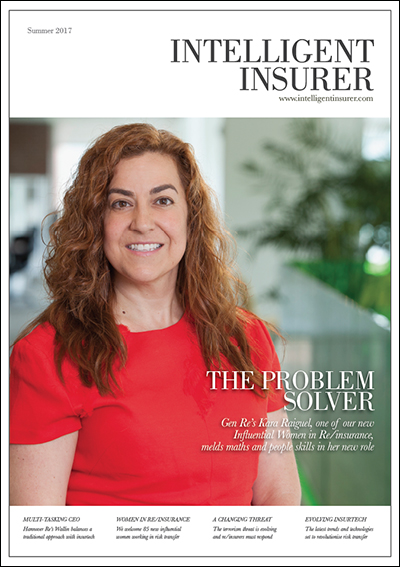 The Summer 2017 issue of Intelligent Insurer is available to read as a digital magazine on your computer, smartphone or tablet.

A traditionalist at heart
Against a backdrop of rapid change for reinsurers, Ulrich Wallin, the chief executive of Hannover Re, explains to Intelligent Insurer that while he is moving with the times the company's core objectives and book of business remain fundamentally traditional.

Industry of opportunity
Now in its third year, our Influential Women in Re/insurance report remains one of our most anticipated pieces of research and extremely popular online. The nature of the report is starting to change, as are the responses given by those we profile.

Ready for action
Chemical, biological, radiological and nuclear attacks represent a huge threat to large populated cities and the material is readily available to terrorists. Pool Re and the Washington-based non-profit organisation Nuclear Threat Initiative explain to Intelligent Insurer why they are now focusing on this particular risk.

Embracing the insurtech challenge
It is widely accepted that some forms of insurtech will transform the risk transfer industry as we know it - a fact that has generated something of an arms race among the bigger re/insurers to partner with platforms and technology companies to make the biggest difference.

The rise of the complete commodity
The value of the traditional reinsurance business model is waning, particularly in North America, where reinsurers are more focused on brokers than they are in Europe and changes are needed.